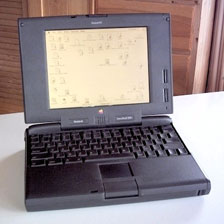 Give the article a look -- it's well worth reading for old Mac aficionados.
Posted by Steven Rosenberg at 6:09 PM

I ordered 40 of these pieces of cr@p back in 1996 when we started a digital fx division at WB. I spent the next 2 years of my life reinstalling the OS over and over! 11 years since hell rained down on me!

I can only imagine what high-end graphics software did to these laptops. It couldn't have been pretty. My whole take on using Macs this old is that the less graphics-intense your needs, the better.