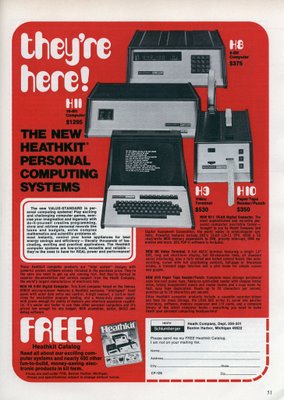 I have a vague memory of The Heathkit H8 computer. To supplement its bread-and-butter amateur radio business, the Heathkit company made quite a stab at staying relevant as the years went by, offering early computers, robots and other things you could build at home and save a few bucks on while learning the art and science of electronics. This fascinating ad and way, way more are available to see at Modern Mechanix. Go to Communications or Computers first.

I remember the Heathkit catalogs from the '80s -- I think the company pretty much faded out by the early '90s. You could build kit versions of ham transceivers and accessories, to be sure, but I think they also had kit TV sets, stereo equipment, even small radios for those who didn't have a mint to drop on something that might not work once you got done with all that soldering. I think Heath had a diagnostic service -- you could send the finished kit back to them if it didn't work, and they would help you out. But part of the kit and its instructions were troubleshooting instructions, and I also remember that for ham radios, you needed a VTVM -- a vacuum tube volt meter -- which itself went for about $100 in the '80s in order to properly align the circuits.

I bet there's quite a market for Heathkits, assembled and the rare unassembled ones, on eBay. I wish I saved some of those old catalogs, that's for sure.

Not to get off track, but this gets me to thinking about old Radio Shack catalogs, which I remember getting every year from one of the local stores -- we had one in the now-mowed-over Laurel Plaza shopping mall in North Hollywood (where I built about three "Perf Box" shortwave radios, cost $7.98 each, with coils wound around AA batteries -- and none of which ever worked) . I always wanted one of these DX-160 shorwave receivers. This is the kind of thing that fuels eBay -- buying the stuff we could never get as kids but which now is cheap, even if it doesn't work all that well.
Posted by Steven Rosenberg at 1:12 PM No comments:

For those running Macs of a certain vintage, especially the PowerPC era, the way to get the most out of your computer is to run System 7, primarily System 7.6.1. How do I know this? I learned everything from Dan Palka of System 7 Today. Dan makes a very good case as to why you should run 7.6.1, even if you have enough memory to go to System 8, and even if you think you're happy with 7.5.3, or something even earlier. Dan is also active on the e-mail lists at Low End Mac, my other beacon of old and moldy Macintosh knowledge, especially the Powerbook list.

More on Low End Mac later. On System 7 Today, besides a lot of knowledge, Dan provides plenty of free utilities and software to make your old Mac as productive as it can be. It was through him that I procured the one program that turned out to be the saving grace of This Old Mac: Internet Explorer 5. Don't laugh. In my opinion, it is the best browser for 7.6.1. I'd like to say iCab is better, but while many Web sites look better in iCab, it just isn't as stable as IE5.

And don't get me started on e-mail programs. After much testing on my part (and some of this is due to my ISP, no doubt), the only way I can get e-mail through a POP account is with Netscape 4.7, which though supposedly "tuned" to the PowerPC chip is very slow. But it does work, and it allows offline reading of mail and Usenet news. Now my "lifestyle," or should I say computing style makes it better for me to read mail via the Web, so I'm sticking with Yahoo! and IE5 as the best solution for the moment. For those who can run OS 9, I do recommend Netscape 7, but that is pretty much a pipe dream for Mac OS 7.

Anyway, Dan is a very good guy to know, and what's amazing is that he's in his early 20s. Now it's not unusual for somebody that young to have a lot of computer knowledge. But about systems and software that is 10 years old?
Posted by Steven Rosenberg at 11:02 PM No comments: